, according to people familiar with the matter.

MNG Enterprises Inc., one of the largest newspaper chains in the country, has quietly built a 7.5% position in Gannett’s stock and plans to publicly urge the McLean, Va., publisher to put itself up for sale, the people said.

MNG, better known as Digital First Media, will also offer to buy Gannett for $12 a share, they said, which would represent a 23% premium over Friday’s closing price of $9.75. The shares, which fell steeply last year, have been rising lately.

Closely held Digital First is known for its contentious history with the newspaper industry in part because of its penchant for slashing costs. It has over the past few years made multiple approaches to Gannett about a deal but has been rebuffed, the people said. At least one approach was made in the past month or so. It isn’t clear whether Gannett will be receptive now.

In addition to publishing USA Today, one of the top-selling papers in the country, Gannett owns and operates dozens of other publications such as the Arizona Republic, the Record in North Jersey and the Naples Daily News in Florida. Its shares have tumbled in recent years and dropped roughly 15% in the past 12 months, leaving the company with a market value of about $1.1 billion.

The print media industry has suffered sharp revenue declines as digital advertising sales fail to keep up with drops in print advertising. This in turn has prompted a wave of consolidation among publishers looking to benefit from economies of scale and cut costs, often through layoffs. Both Gannett and Digital First Media have been active acquirers.

Digital First Media owns about 200 newspapers and publications including the Denver Post and the Orange County Register. Last year it beat out other bidders to buy the Boston Herald after the tabloid had filed for bankruptcy.

This wouldn’t be the first time Digital First Media has faced a fight. Since it bought the Denver Post, the paper’s staff has shrunk, prompting outrage from news-industry unions but helping make Digital First one of the most profitable newspaper operators.

The dispute is one of the most high-profile in a series of recent battles between a newsroom and its ownership. But USA Today, one of the most recognized papers in the country, would be the best-known target it has set its sights on yet.

Digital First Media’s largest shareholder is Alden Global Capital LLC, a New York hedge fund that focuses on investing in distressed companies. It became an investor in the debt of an MNG entity in 2010 after that company’s own bankruptcy and became the biggest shareholder several years ago.

Alden, founded by Randall Smith and Heath Freeman, has more than $1 billion under management. The sometimes-activist investor is known for slashing costs at its media investments through layoffs and the use of zero-based budgeting, an approach that requires operators to justify their expenses each year.

Digital First was formed in 2013 as the result of the merger of Media News Group and the Journal Register Co. It quickly moved to unload much of its real estate holdings and printing operations and made steep staffing cuts across its titles, consolidating considerable aspects of its operations in centralized hubs.

In late 2014, Digital First explored selling all its newspapers to

LLC, but called off talks the following year after the two sides couldn’t agree to a price.

In early 2016, Digital First acquired the Orange County Register and other Southern California newspapers out of the bankruptcy of Freedom Communications after the Justice Department blocked the winning bid by Tribune Publishing.

Gannett has been seeking to remake itself. In 2016 it bought Journal Media Group Inc., owner of the Milwaukee Journal Sentinel, and made bids for the publisher of the Chicago Tribune, Tribune Publishing Co. It ultimately backed off amid resistance from Tribune Publishing, which until October was known as Tronc. 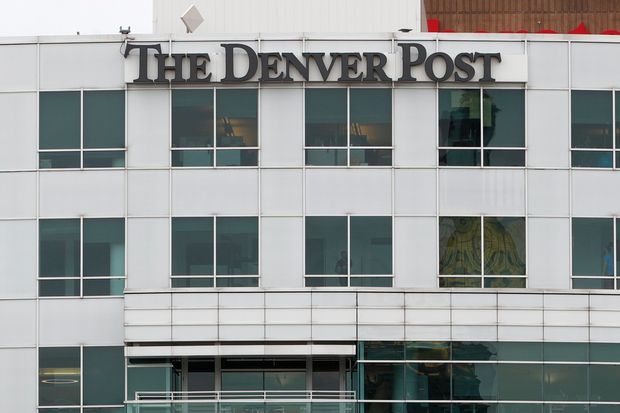 both Gannett’s stock and that of Tribune Publishing have rebounded since the beginning of the year, possibly indicating investors’ anticipation of consolidation.

Digital First Media’s bid comes as Gannett faces voids in its top ranks. The company said last month that Chief Executive Robert Dickey plans to leavein May, or earlier if a replacement is found sooner, and the chief of its online-marketing business, ReachLocal Inc., also plans to depart.

Digital First Media wants Gannett to hire bankers to consider a sale, enter into talks with Digital First about a deal, review its strategy before hiring a new CEO and halt acquisitions of digital assets, the people said.

Denver-based Digital First Media believes it will be hard for Gannett to turn around its operations while it is publicly traded, making a sale the best option, the people said. It hasn’t ruled out pushing for changes to Gannett’s board of directors if the company isn’t responsive, they said.

Gannett is scheduled to report its fourth-quarter results Feb. 18. During the first nine months of 2018, revenue from its advertising business fell 7% from the prior year to $1.23 billion. Overall, sales were down 6% to $2.17 billion.

—Lukas I. Alpert contributed to this article.

Write to Cara Lombardo at cara.lombardo@wsj.com